Small forward infected with "super bug" bacteria over the summer. 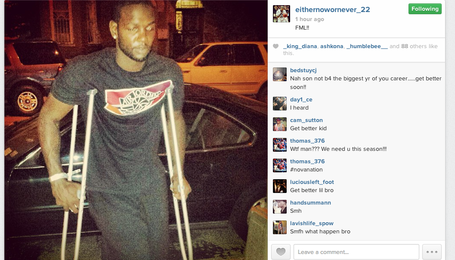 Over the summer, rising Villanova junior JayVaughn Pinkston posted a picture of himself on crutches to social media with the comment, "I think I torn my muscle in my ankle I have to get a MRI tomorrow."

No official word from campus was released on the incident. Initial thoughts were an injury was sustained during summer ball, but a New York Post article has released insight on the incident with an even worse reason.

The Post's Zach Braziller went on to tell that after Pinkston's leg "felt funny," he was diagnosed with Methicillin-resistant Staphylococcus aureus- MRSA.

One morning, Villanova’s star junior forward couldn’t get out of bed, unable to put any weight on his right leg. He needed crutches to get around. His leg felt funny, like it was in a microwave overheated. Puss was oozing out of his calf and it was turning orange.

As described by WebMD, "Staph is one of the most common causes of skin infections in the U.S. Usually, these are minor and don't need special treatment. Less often, staph can cause serious problems like infected wounds or pneumonia."

Due to the quick diagnosis, long-term damage was minimized. But for a player whose college career started a year late, it was an unnecessary setback for a player with Professional Dreams. Over the summer he spent three weeks without touching a basketball.

The Brooklyn native will be a main focus for the 2013-14 Wildcats. Pinkston was selected as a preseason All-Conference 2nd Team player looking to improve on his 13 points a game average he tallied as a sophomore.

The incident has given Pinkston greater focus on the upcoming season. He told The Post, "It was just an eye-opener. Anything can happen at any given time and anything can be taken away from you."

Hopefully, Wildcat opponents are the next victim.