The Cats continue to do better than their opponents on at least three out of four critical statistics, providing one compelling explanation for their great start.

At 7-0, the Cats are off to their best start since the 2009-10 season when Scotty Reynolds still roamed the hardwood for Villanova. A model we built based on the seminal work of Dr. Dean Oliver, Basketball on Paper, also is a perfect 7-0. That model picks the winning team based on four in-game head-to-head stats - eFG%, TO%, OR% and FT Rate - which Dr. Oliver found determine the outcome of most basketball games. A fuller explanation of Dr. Oliver's study is provided in our November 26 post.

The table below shows how Villanova has won its seven games this season from the lens of Dr. Oliver's model. 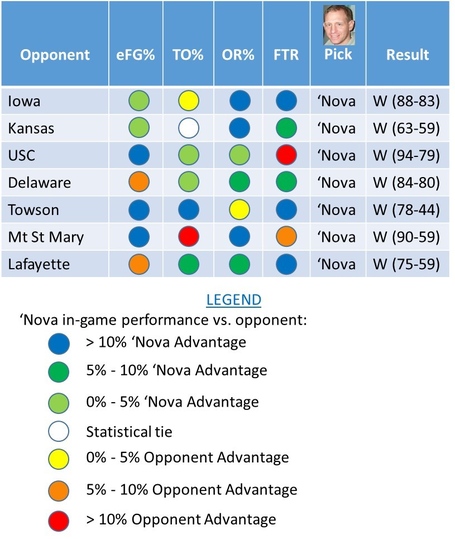 The story lines on the three games in the Battle 4 Atlantis are as follows:

Of course, advanced statistics can explain only part of the story of the Cat's great start. Selfless play, great team chemistry, excellent coaching (including substitutions and in-game adjustments), a never say die attitude, fearless approach, team rebounding, good ball movement, making the extra pass, great depth, and a lot of heart (and Hart) are some of qualitative factors that come to mind.

Whether you side more with the stat geeks or the soft sciences in explaining the Cat's success, I think we can all agree that you've gotta love what the Cats are doing on the court this season.