Who will be rooting for Villanova this March?

Living in Toledo? How about Denver? Anchorage? Now that March Madness is upon us, where in America are the Villanova fans?

Share All sharing options for: Who will be rooting for Villanova this March?

Facebook is the home-base for billions of social media users, so Facebook demographics can offer us a pretty good look at what the population-as-a-whole is thinking. Recently, Gizmodo published the results of a look into the over 1 million Facebook "likes" that have been issued to pages representing the 68 schools in the NCAA Tournament field.

The results are interesting, to say the least, with the ACC seemingly the most-liked conference in the land, while the Big East has spotty coverage, even in it's northeastern homeland. 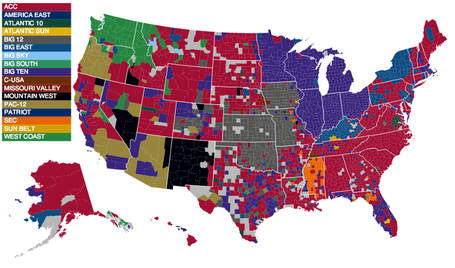 A lot of that is due to a large Facebook fanbase for UNC, which is a college basketball "blue blood" and a perennial power in the sport. Even as an 8-seed, the Tarheels easily have the most widespread support in the South Region of the bracket. 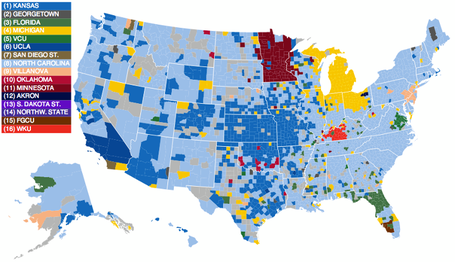 Villanova has a smaller pocket of fans, centered around the Philadelphia area and stretching into most of New Jersey and across New York City to the nearer portions of Long Island and Delaware to the south. The Villanova area is mostly contiguous, but has satelite regions in Central Pennsylvania, near State College, as well as in Alaska -- specifically Bethel County (population 17,013), home of the only prison in southwestern Alaska. 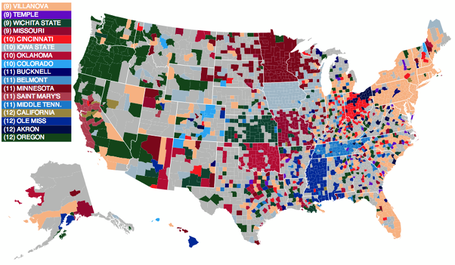 Among the group of seeds ranked 9-12, the Wildcats have easily locked down the support of most of the Northeast, parts of the South, and a majority of Florida. Pockets of support dot the rest of the country, with notable chunks in California, Nevada, and (of course) Alaska.

Are these maps indicative of the Wildcat's fanbase? Facebook seems to think so. The 'Cats better hope that fans fly into Kansas City and (if they advance past Sunday) to Dallas if they hope to hear some cheers on their NCAA tournament road.

Maybe the County of Bethel, Alaska can fly to a warmer climate the next two weekends to cheer on their Wildcats.

For more maps and analysis, check out the note posted on Facebook.