Villanova forward JayVaughn Pinkston was admitted to the ARD program by a Montgomery County judge this week, allowing him to clear his record in two years

In November 2010, Villanova forward JayVaughn Pinkston was involved in an off-campus incident involving two other Villanova students. 30 months later the case's end is in sight. If Pinkston can stay out of trouble for the next two years, he will leave Villanova with a degree and a clean slate. 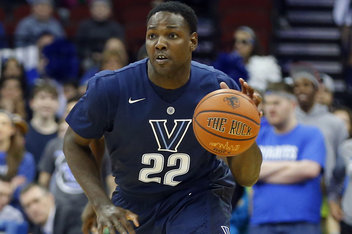 As part of the agreement the Wildcats' leading scorer from last season was ordered to complete two years’ probation and 375 hours of community service. He was additionally enrolled in anger management classes, ordered to write letters of apology to the two alleged victims, and maintain "good academic standing at Villanova University," according to the court order issued on Tuesday.

Pinkston will also be responsible for paying around $8000 in restitution for the victims' medical expenses.

Admission into the program is usually reserved for non-violent offenses, but an exception was made in this case for Pinkston, under the Judge and Prosecution's discretion. The defense will not present any defenses and there will be no trial in the matter, so long as he satisfactorily completes the program requirements. At the end of the program, the court will dismiss all charges against the Villanova forward.

"After extensive consultation with the Upper Merion Police Department and the victims in this case, the district attorney has determined that the facts and circumstances of the events surrounding JayVaughn Pinkston's involvement with the criminal justice system are best resolved by his acceptance and participation in the ARD Program," [Assistant District Attorney Lauren] McNulty previously explained.

Conviction at trial for the simple assault charge as well as two counts of summary harassment carried a potential maximum jail sentence of two years in jail. While a maximum sentence might not have been the likely outcome, the ARD program is not nearly as harsh as the possibilities that would stem from a loss at trial.

This ends a process that took around two and a half years from the date of the incident to reach this stage.