Can the Wildcats make a splash in March?

Share All sharing options for: Can the Wildcats make a splash in March?

Villanova has two losses on the season, and plenty of victories. The Wildcats lost by 16 to a Syracuse team that remains undefeated, and was carpet-bombed by Creighton on Monday for a 28 point loss. The Syracuse game was arguably 'closer' than the score ultimately shows, but against the Blue Jays, Nova was overpowered and out-gunned from the opening tip.

Without over-analyzing the situation, we can certainly note that Villanova has a great RPI score despite the losses and looks set to achieve a very good seeding in the NCAA Tournament. Before the season, a good seed and a chance to win a game or two in March was probably all anyone expected from this team, but upon their triumphant return from Paradise Island, expectations were higher.

Could the Wildcats do it? With a number-two ranking on KenPom.com and in the RPI heading into Monday's game against Creighton, it certainly seemed like the Wildcats had what it takes to make a run at the final weekend of the tournament.

A Philly.com poll on Tuesday, however, showed that local expectations have come down to earth, at least a bit. 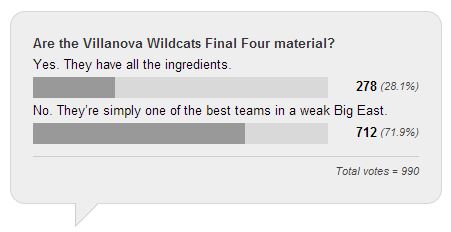 Currently, the Big East doesn't look terribly strong. Creighton will almost surely re-join the AP Top-25 poll next Monday after their blowout win at the Wells Fargo Center, but no other team in the league is likely to jump up so high. The league is currently projected to get (maybe) four bids to the Dance, but that would put them a solid eighth among NCAA Conferences.

Is Villanova simply taking advantage of a relatively weak Big East this season? Did the Creighton game reveal some horrible truth about the Wildcats?

In the past, KenPom.com has been a terrific predictor of a school's tournament chances. Defense wins championships, or so the saying goes, andfrom 2008 through 2012, the following have been true:

To make it to the Final Four as a defensive outlier, a team normally has to have a very efficient offense. That was the case with Michigan last season, coming in at 48th in defensive efficiency, but scoring at a higher clip than anyone in the nation. VCU was the worst defensive team in that stretch to make it to the final weekend, having the 86th-best defense according to KenPom in 2011.

The point of using these adjusted efficiencies is that they attempt to account for the quality of an opponent's scoring and defense, rather than just tallying up points scored. If you schedule a ton of bottom-feeders (or play in a weaker conference) KenPom won't reward you as much for hanging a hundo on Grambling State, for example, as it would if you faced St. Louis.

In other words: Yes, the Wildcats are within striking distance. Where the 2009 team was strong and this team was weak, however, was defending the perimeter -- where the 'Cats opponents averaged 33.6% on 3-point shots in 2008-09, they are making 36.2% this season.

Then again, how much of that damage occurred on Monday night?

Villanova won't face many opponents who are as proficient outside the arc as Creighton was on Monday. In fact, Creighton is rarely as efficient themselves, averaging around 43.7% from beyond the arc this season. In the next month, Villanova's defensive efficiency could and should improve from this point.

Statistically speaking, Villanova certainly isn't out of the picture for a Final Four berth. The team has its faults, but what team in college basketball doesn't?

So, looking at the numbers, it isn't unthinkable for the Wildcats to make a run. It also isn't a lock, or even likely, necessarily. There are a lot of games between now and April 5th, and nothing will be decided before then.