Is Creighton a Rivalry? Do Villanova fans want it to be?

After Monday Night's loss, Jay Wright thinks that the Bluejays could be a rival for his Wildcats, but are they? Will they ever be?

Share All sharing options for: Is Creighton a Rivalry? Do Villanova fans want it to be?

Rivalries are driven by the fans. At least in college sports.

Teams may hate each other, but with athletes moving on every four years, it is the enduring fanbase that has to accept, promote and desire a rivalry for it to truly take hold long-term. Even then, some rivalries are stronger than others, or lose value over time.

Villanova used to have a big time rivalry (football, mostly) with Boston College, but that seems like a matter of the past. Syracuse is a long-time rival, and things with Georgetown could reignite in the new Big East, while traditional rivalries with Big 5 schools like St. Joseph's mean something different to fans of different generations.

"I hope it's a rivalry," Wright said on yesterday's teleconference. "When Kyle Korver was here, people asked why don't you play Creighton? I use to tell them 'I don't want to play them.' I'm looking forward to a rivalry with Creighton these next few years."

Coaches can sometimes will a game into rivalry-status, as John Thompson once did when he declared Manley Field House, the former home of the Syracuse Orange, to be "Officially Closed." Jay Wright, however, isn't the type of coach who does that. He congratulates his opponent and praises their effort, whether they win or lose -- he bites his tongue. That is how Villanova seems to prefer it anyway, and that leaves it entirely up to the fans to decide what games will be rivalries for the 'Cats. 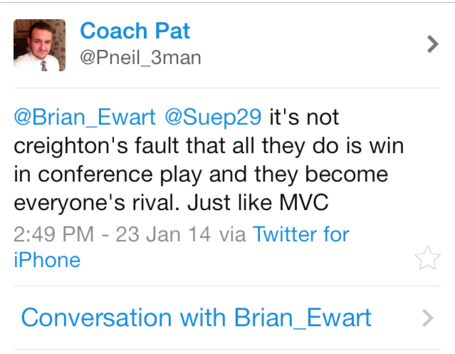 For the first to happen, Villanova will need to actually win a few. It wasn't close on Monday night and nobody in the nation would have been able to withstand the destructiveness of Creighton's three-point barrage. Will that happen again on February 16th? If it does, we may have to wait until next year -- after the Bluejay's shooters graduate -- for that first option to really kick into gear.

The second option, however? That could happen much sooner.

Every fanbase has its bad seeds, and Creighton likely doesn't deserve to be defined by its worst, but thanks to the internet, everyone's worst side is their loudest and farthest reaching. At least one Creighton fan, has gone out of his way to troll Villanova fans on Twitter, and others have a seemingly quick-trigger at any comment they feel may demean their school's greatness on the hardwood.

@Brian_Ewart maybe so. But remember our fan base desperately wants to shake off the mid major label, so we get defensive pretty easily

Of course, its understandable, and maybe that is what keeps this match-up from achieving rivalry status so soon. Villanova fans aren't jumping down Creighton's neck even with the subset of Jays making noise on the internet.

@Brian_Ewart let them trash talk. They could've scored 120 if they wanted to Monday. That kind of performance merits trash talk.

Unless that changes, a true rivalry will take time to develop, but don't count it out. Creighton has hit the ground running in this league and performances like Monday night's give them a chance to take a piece of the spotlight. As the new Big East develops, Creighton could very-well become the team Villanovans most want to beat.

Is Creighton a rivalry for Villanova?

This poll is closed