Tuesday kicked off the Reebok Classic Breakout at Philadelphia University. From July 8-11, over one hundred of the top high school athletes in the country came out to show off their game in front of the best Division-1 coaches and programs in the country. Some coaches that made appearances on Wednesday included Michigan Wolverines' John Beilein, Kentucky Wildcats head coach John Calipari, Villanova's own Jay Wright, and newly crowned National Champion Kevin Ollie of the Connecticut Huskies.

Villanova has shown serious interest in 5 of the 142 total high school kids to attend, one of whom already committed to the Wildcats. Tim Delaney (2015) is that future Villanova Wildcat, and alongside him on Team Quick was Sedee Keita (2016), a fellow forward and Villanova recruit. Highly touted shooting guard Tyus Battle (2016) was also in attendance, having already received offers from UConn, Villanova and Kentucky, among others.

The two other Wildcat recruits are Derrick Jones (2015) and Chris Silva (2015), both having received multiple offers from other Division-1 programs.

If you have seen our very own Chris Lane's Big Board, you saw that after the 2015-2016 season there is a substantial drop-off of scholarship athletes with 5 seniors due to graduate. Commitments from the athletes listed above could alleviate the shallow roster issue. After one full day of the camp, here is what I've taken away from each athlete. 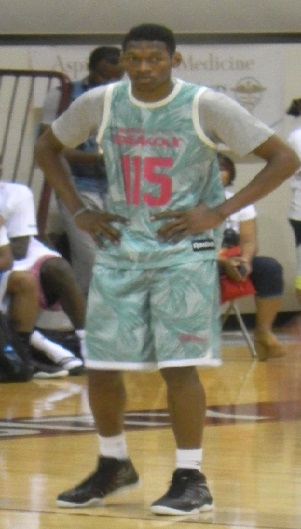 Defense is where Chris Silva thrives. He looked sluggish running back from offense, but his play did not reflect it at all. On multiple occasions he was able to block the shots on transition. He responded much better to the zone defense rather than man-to-man, however he held his own throughout most of his games.

Other than speed, he will have to improve on bulking up to make the most of his 6'9" stature. Even so, Silva managed 3 rebounds in about two quarters of play.

His offense was none too impressive, scoring his two points on free throws and attempting one 3-pointer, but his defense surely made up for the lack of offensive presence.

This kid left the biggest impression in my mind.

Most players made some sloppy mistakes such as missed put-back layups and dishing passes that were too high, mostly because they are still improving. Battle had none of that. His passes were crisp and he had amazing ball control. While being listed as a shooting guard, Tyus acted as point guard on many possessions and had no issues with the extra load.

On the defensive end, he was aggressive on the point as he would fight through screens and never let his man get behind him. It is clear why the top programs are eager to seal this guy up. He has one-and-done written all over him.

After Battle, Jones was the next best Villanova recruit in my opinion.

What struck me the most was what he did off the court. For many of these teams, two mini-teams of five were created and then switched out each quarter. Most players looked uninterested as they waited on the bench for their time to come back in. Jones, however, was still very vocal. He cheered on his teammates for good plays and talked to his coach a few times to share what he saw or to learn what his coach wanted.

His eagerness to make in-game adjustments proved great as he was able to improve as the game went on. He also showed leadership on the court, especially on defense as he would point to open spaces on the floor and direct his teammates to screens and cuts. He disrupted a few passes with quick reflexes, too. On offense he would sit in open space on the perimeter and wait for the ball, but he was quick to the basket and could even take a jumper. For a small period of time in the fourth quarter, Jones played point guard and looked D-1 ready. His passing skills were best seen on transition, gracefully moving the ball to any open men or simply driving through the paint and finishing with a big dunk.

A high school kid with lots of talent and leadership qualities is always welcomed on my team.

Like Jones, Keita was also a leader on the floor. Unselfishly he would grab an offensive rebound and give it off to the man underneath instead of putting it back himself with a more difficult shot. Keita was vocal on defense as well, but unlike Jones he would primarily work in the paint.

Keita was very physical with his defenders, making it tough to call for the ball and also difficult to make anything of a play. There were some instances of Sedee shooting from outside, but most of his game came between the lines.

Lastly we have Tim Delaney, the Villanova commit since his sophomore year. Unfortunately he looked the least impressive of all the Villanova interests, but his play fits well into Wright's system.

All the other recruits are looking to be stars on their respective teams, just like your usual one-and-done candidates from Kentucky. Jay looks for players that will stay for four years and are easy to mold into a team. That is exactly what Delaney is. Standing at 6'9", he made rebounding look too easy, even grabbing boards with one hand at times. Delaney always had the upper hand on the rebounding, like on free throws where he would be the first one to the ball more often than not. He set screens on each possession; always good to see players move without the ball. Tim exceptionally kicked the ball out to his teammates on the perimeter, something he will probably do often in his four years at Villanova.

One major flaw in his game is ball control. We would not expect a forward to lead the coast-to-coast transition on every occasion (unlike what we saw Daniel Ochefu do this season) however he did not look comfortable bringing the ball over the timeline at all. Even if it were just posting up in the paint his dribbling looked too sloppy. He still has one year to go before making his way to the Main Line, so that is something he can improve on with ease.