The 2014-15 NCAA basketball attendance numbers were released on Monday and Villanova's rankings are in line where most Wildcat fans would expect.

Former Big East rivals Syracuse took the top spot for attendance, averaging over 23,854 fans per game in a season where they went 18-13. 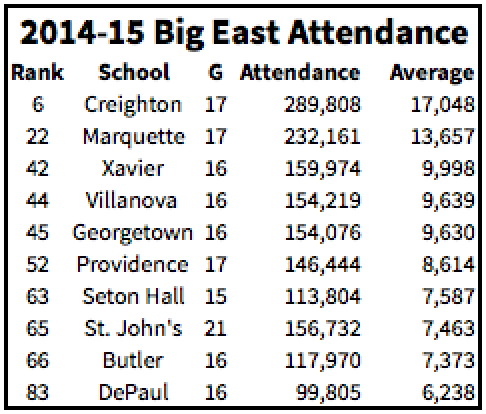 The Big East did rather well in attendance in the second year of the brand and league being rebooted, with a total attendance of 1,624,993, the conference ranked 5th among the Division I leagues edging the Pac12. The conference was led by Creighton, who packed an average of 17,048 fans into their Omaha stands this season. Marquette, Xavier, and Georgetown were also in the top-50 for attendance, checking in at 22nd, 42nd, and 45th respectively. All of the league's member's were in the top-100 schools listed by the NCAA.

DePaul had the lowest attendance in the Big East, averaging 6,238 fans.

A total of 388,920 people saw Villanova last season- on the road or at home. That is 29th overall and the second-best number in the Conference.

Finishing ahead of the Big East were the Big Ten, ACC, Big 12 and SEC, in that order, all of whom averaged over 10,000 fans per game. The midwestern-based Big Ten Conference averaged a stunning 13,534 fans per game; the Pac-12 was the lone "Power-5" conference ranked behind the Big East.