There is a very large part of me that shudders to think that I'm posting this... but hey, a story is a story...

Share All sharing options for: Villanova quarterback named one of Seventeen's "hottest"

John Robertson may be the quarterback of the FCS Villanova Wildcats, but he has FBS-level good looks, according to the experts at teen-girls' magazine, Seventeen. The Seventeen list of top-25 college athletes was not quite based upon talent, success or athleticism, but focused instead on who a writer -- Macy Hall -- thought was "cute."

Ms. Hall is a graduate of the University of Maine, which means that her alma mater was very familiar with the Wildcats. According to her twitter profile, she's a "taco enthusiast," who happens to be a fan of rating the attractiveness of athletes in both college and the pros.

Robertson can rest easy now, knowing that if football doesn't pan out for him, he will always have a back-up career as a teen heartthrob. 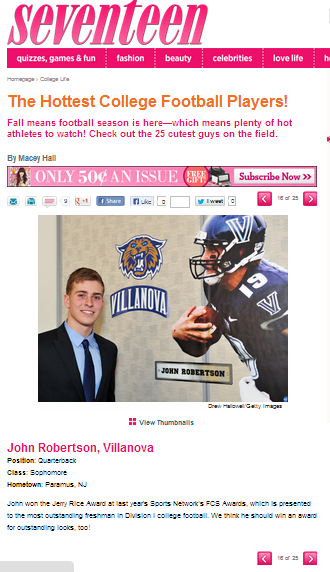